The benefits of reflexology include: 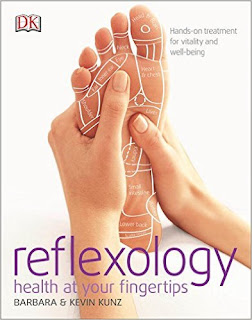 These benefits are backed up by research.

Posted by Kevin Kunz at 4:14 PM No comments: 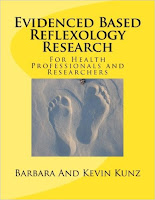 Evidenced Based Reflexology Research: For Health Professionals and Researchers

Email ThisBlogThis!Share to TwitterShare to FacebookShare to Pinterest
Labels: evidence based research, reflexology 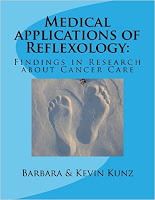 It’s an image of ourselves none of us wants to think about: being rolled into surgery. And, it’s easy to imagine anxiety running high both before and after the operation.
Well, it turns out reflexology can come to the rescue. It’s a real-world application of reflexology’s well known relaxation results. This is important as anxiety can be detrimental to the successful outcome of the medical procedure.
As note by Israeli researchers, “Preoperative anxiety, which can lead to elevated blood pressure, rapid pulse and sugar metabolism changes, is one of the most significant factors predicting mortality among postoperative cardiovascular patients, according to Prof. Lital Keinan Boker from the Faculty of Social Welfare and Health Studies at the University of Haifa. … “These symptoms of preoperative anxiety can influence and extend the postoperative recovery period, added Boker,…
Can alternative therapies help with pre-op jitters? Prof. Boker, Dr. Elad Schiff of B’nai Zion Hospital in Haifa and master’s student Samuel Attias  decided to find out. And, reflexology turned out to be part of the solution.
360 general surgery patients were assigned to one of three groups: standard care; an alternative therapy (acupuncture, reflexology, individual guided imagery or a combination of reflexology and guided imagery) or generic guided imagery.
“The study found that the greatest reduction in anxiety – by an average of 4.22 points – was achieved when patients received a combination of standard care together with reflexology and guided imagery.”
“In general, patients who received the combination of complementary medicine and standard care showed a reduction of 60 percent in their anxiety level, … representing a reduction from an intermediate-to-high anxiety level to a low anxiety level. Those who received standard care reported an increase in anxiety levels with “70% of patients in this group continued to report intermediate to high anxiety even after receiving medication.”
http://www.israel21c.org/alternative-therapy-helps-pre-op-anxiety-post-op-results/
For further information about alleviating pre-op and post -op anxiety and more, see

Posted by Kevin Kunz at 3:59 PM No comments: