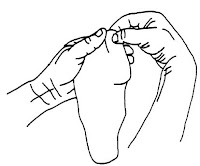 The irony of this is that our friend had his life saved with reflexology. It turns out that he has a rare genetic disorder whose only symptom is sudden cardiac death. He had been revived using reflexology and was fitted with a defibrillator to protect him from the next attack. http://www.reflexology-research.com/revival.html

He was at the job counselor's office because he could no longer do his occupation of bricklaying. The defibrillator prevent him from doing this and he was seeking a new line of work. Needless to say he wasn't impressed with the job counselor's point of view.