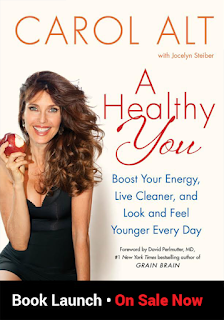 Editor note: This was a report in Sports Illustrated in 1987 well before we did her show. She had an interest back then.

Cover girl Carol Alt suggested reflexology and successfully applied it to her professional hockey player boy (Ron Greschner) friend who has tried everything for his back problem.

"He tried traction, chiropractors, acupuncture, the Mayo Clinic, papaya enzyme injections - you name it - but nothing helped … Finally, on Alt's advice, Greschner tried a therapy called 'reflexology,' a sort of manual acupuncture geared toward massaging the nerve endings in the feet and hands. 'The first time I did it to him,' she recalls, 'I had him screaming, just by rubbing his feet. He almost fainted and I wasn't strong enough to do it right.' "Greshner began seeing a reflexology therapist, and the back slowly mended. 'I don't even know what happened medically,' he says now. 'I haven't had a back X-ray since 1983. All I know is that I've been hit hard, and I can lift rocks on our farm in upstate New York, and it doesn't bother me. Knock wood.' " (Feb. 9, 1987 Sports Illustrated, p. 91,"Carol and her big lug”)
Posted by Kevin Kunz at 12:45 PM