Walking the Reflexology Path: A Year on the Rocks 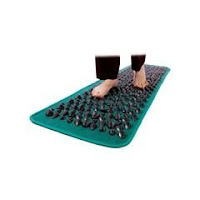 A year of walking the reflexology path... Yes, June 5 will mark the one-year anniversary for me. I'd been using reflexology mats with their synthetic rocks for some twenty years but this was a different pursuit. As opposed to my previous sporadic efforts, this was a frequent and consistent walk on the rocks with a minimum of forty minutes three times a week. At the end of the year, I pause here to ask myself: was it worth it? My answer is definitive: YES. I wouldn't have missed it for the world and I won't be quitting any time soon.

It started as an exploratory project. We were, after all, writing a book for inclusion in a kit and we wanted some perspective. I started with the program followed by participants in an Oregon Research Institute (ORI) study. See below. I then branched off using tips gathered from Chinese Web sites discovered by using Google translate.

My conclusion: Walking the reflexology path is more than worth the effort. My own informal tabulation of results included: improved circulation, overall body temperature and digestion. More of a surprise was the exercise effect: shaping up the muscles of buttocks and legs, stronger movement and better posture. My feet liked the heavy pressure produced by the gravity-based experience. They felt lighter and more connected to the ground after walking. Over time, they just seemed to feel good period. There were also surprises early on: feelings of euphoria (as reported in a Japanese study of bamboo stepping) and better typing skills. These have been replaced as time has gone by. I now feel more of an overall sense of well-being. My typing skills are back to normal.

Is injury possible? Yes, just as over-doing anything, walking the reflexology path can be overdone. For me, it was walking backwards doing it as much as walking forward. It caused pain in the fascia of my heel. Solution: I cut down on the amount of walking backwards.

Are there undesirable effects? For me, again it was over-doing. Early in my program, walking too much resulted in hip joint discomfort. I also found my legs to feel heavy at times. In both instances, I quit walking and became mindful of how much walking was optimal for me.

I followed the ORI study protocol: walking three times a week for 30 minutes over an eight week period plus warm-up and cool down periods of 5 minutes each. My variations included use of bamboo stepping as a warm-up and cool down instead of ORI's rolling the foot on a wooden roller. While the ORI program consisted of actual mat walking of 12 to 25 minutes per session, I walked a solid 30 minutes. After the 8-week period, I considered my results. Then, influenced by information from China, I decided to walk every day. Some days it was 15 minutes (as suggested by the information) due to time constraints or because I just didn't feel like it. I continued a minimum of three 40-minute sessions a week. There were holes in this schedule. I missed a three week period because of travel and a busy schedule.

What could you expect if you tried this?

I would definitely say that results will vary quite simply because each individual will come to the experience with varying circumstances: age, previous history of physical exercise, and level of health among other things.

Negative effects will also vary with these factors. Those with pre-existing foot or joint injury or pain should proceed cautiously. Consider whether or not mat walking is for you. Pay close attention to your reactions if you do mat walk. Start off with short intervals so you can judge the results. Be aware of pain levels and the potential for achiness in joints.

ORI found that mat walking study participants (all over the age of 60) experienced improvements not shown by participants who just walked. Participants walked three times a week for 45 minutes over an eight week period including warm-up and cool-off periods. Mat walking was divided into intervals of walking ranging from 1 to 5 minutes with foot rolling in between intervals. The total time of actual mat walking ranged from 12 initially to 25 minutes eventually. Mat walking participants showed improvements of: lowered systolic blood pressure; improvement in ability to control falls; significantly lessened pain; significantly reduced daytime sleepiness; "improved perceptions of psycho physical well-being" and "increased levels of self-reported IADLs (Instrumental Activities of Daily Living)."

Reports found on Chinese Web pages note results such as: prevention of colds and flu; improved circulation to the whole body and brain; improved functioning of many of the body's organs; and improved mental acuity. Tap shek (stepping stone) fitness is recommended by the Chinese government. The construction of reflexology paths is a part of construction of other facilities (e. g. soccer fields and badminton courts) to encourage the Chinese people to participate in a national program of fitness.

One Japanese study reported on the results of including bamboo stepping with other measures to help ease the stress of mothers of hospitalized children. The bamboo stepping was a favored part of the program and succeeded in reducing stress.

Hi, Interesting story, I have used mine occasionally over the years and taken it to my T'ai Chi classes every so often. Finding this and the ORI study have inspired me to try offering this to the public. Do you have and links to Chinese pages, and copies of their content? Thanks, John P.S. love your books!

Have you checked out the swedish Reflexology Mat? It utilises the body’s own self-healing process is and stimulates the relaxation that takes place and the whole of the body receives a boost as the circulation and nervous system is activated.

I certainly wouldn't stand on this mat. Instead, I sit down and stretch out my feet on the rubber nubs on the mat. It has worked wonders for my plantar fasciitis. I stand all day on my feet at work and buy the end of the day I can barely stand. This 20 dollar mat has worked better than I thought it would. I highly recommend this mat.

You can get more information. Here is address of Futzuki Reviews