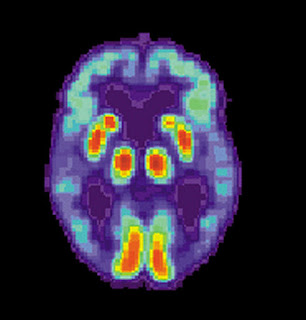 Exposure of “Alzheimer’s mice” to specific sound and light has been demonstrated by MIT researchers to increase activity of gamma brain waves and, as a result, lessen amyloid plaque areas in the mice brains. (1) (2)

Gamma brain waves are known to decrease in activity for those with Alzheimer’s. In both the light and sound studies it was found, “Once the brain is flushed with gamma waves, two effects come into play: fewer amyloid plaques are produced and more of these existing plaques are cleared out by immune cells known as microglia.”

The researchers hypothesize that other sensory experiences could impact further areas of the brain. ‘If we can activate gamma (brain waves) in many different brain regions, perhaps we can get a huge area of the brain involved,’ says (MIT researcher Dr. Li-Huei), Tsai. ‘Treating the whole brain will be important for people with Alzheimer’s disease.’” (1)

MIT researchers would like to determine “whether other modes of sensory stimulation, such as sound or touch, have similar effects on the regions of the brain that process those inputs. Ultimately, the goal is to find multiple ways to noninvasively stimulate the brain so that the induced gamma waves propagate strongly throughout it.”

Reflexology technique application provides the sensory experience of pressure to the feet and hands. Kunz and Kunz posited this theory in 1981 following work with paralyzed individuals.  Pressure sensors in the feet communicate information about movement as well as activities throughout the body including mechanisms such as the autonomic nervous system. (3)

“The frontal lobe (cortex) is the part of the brain that controls important cognitive skills in humans, such as emotional expression, problem solving, memory, language, judgment, and sexual behaviors. It is, in essence, the “control panel” of our personality and our ability to communicate.… “It is also responsible for primary motor function, or our ability to consciously move our muscles, and the two key areas related to speech, including Broca’s area.” (5)

Exposing “Alzheimer’s mice” for an hour a day for a week to lights flickering at the speed of 40 hertz per second “sharply reduced” by half the build-up of beta-amyloid plaque in the visual cortex of mice brains. Longer term treatment showed

MIT researchers also studied using sound to increase activity of gamma waves in the brain. Mice were exposed to sound at a hum of 40 hertz for an hour a day. Results were even more promising than those of the light study. Reduced was the plaque in not only the auditory cortex of the brain but a near-by area the hippocampos where memories are stored.

A reflex area reflecting the cortex of the brain located in the ball of the big toe was targeted by reflexology researchers. Five minutes of application to each big toe for seven consecutive days resulted in an increase in gamma brain waves.

Does reflexology effect amyloid plaque? Such research has not been conducted. (Amyloid imaging using the PET (positron emission tomography) has emerged as a method other than post mortem autopsy. (6)) The possibilities are intriguing. As noted below in more recent research at MIT, longer term application of sensory stimulation of light included effects beyond those noted above.

Further results benefiting those with Alzheimer’s are possible. “… MIT researchers tested the effects of longer-term treatment by exposing mouse models with more advanced Alzheimer’s disease to up to 6 weeks of gamma entrainment by visual stimulation. Results showed stimulation increased gamma brain waves in the visual cortex and higher-order brain areas, including the hippocampus and prefrontal cortex. Continuing stimulation also preserved neuronal and synaptic density in these brain regions, improved performance on memory tasks, and reduced inflammation. Findings point to an overall neuroprotective effect, even in the later stages of neurodegeneration, the researchers reported.” (7)

Books by Kunz and Kunz

Reflexology: Hands-on Treatment for Vitality and Well-being
Complete Reflexology for Life: Your Definitive Photographic Reference to the Best Techniques and Treatments

Intermittent Moving: How I Lost My Pants and Mastered My Weight
Un-Sit Your Life: The Reflex "Diet" Solution

Generally I don’t read post on blogs, but I wish to say that this write-up very forced me to try and do so! Your writing style has been surprised me. Thanks, very nice post. Best of luck for the next! Please visit my web site bodysensemassage.co.nz. Best Pregnancy Massage Christchurch service provider.